We had a very, very late start to the day. I was up at 9am and ready to explore! After making pancakes and frying some eggs and a lot of faffing around, everyone was ready to leave at around 1pm. I would have to get used to this type of schedule! It was just over an hour to Amsterdam by car, which Alex kindly drove. We stopped at a Starbucks halfway there for a bathroom break and I discovered a hot chocolate is over twice the price as I’m used to in the US.

The plan was to park at a train station outside the city (Zeeburg) but when we got there parking was chaotic, so much so that people were lining up outside the gate, waiting for someone to leave. Without a better option, we did the same and were sixth in line. Obviously I thought this was bullshit so I went walking down the street to find a better option. Sabrina joined me in the hopes we’d find a bathroom on the way. Lo and behold, a few hundred meters down the street there was parking, which cost money, but cost less than what the train parking would have. Sabrina got on the phone to Alex and he came right over after we told him at least three times that yes we were sure parking was available (I think he’d moved up a few spaces in the queue). After trying multiple cards in the payment machine, we had success and we were on our way. It was something like 2:30pm at this point, we definitely weren’t making the most of the gloomy day.

Back at the train parking, the line of waiting cars had gotten longer and I went up to everyone in the queue telling them about the parking we’d found. Most were grateful and drove away to where we’d parked. At the station we discovered that the trains weren’t running because of a problem with the line that would last a week so we were directed amongst a big crowd towards a bus stop in the middle of the road. Because of the amount of people, the driver kindly told us not to worry about buying a ticket. That was our first win of the day!

By the time we got to the city, us girls were starving so we went to “Vapiano”, a restaurant on the water overlooking the city of Amsterdam. I had no idea it is a city built on canals, having more canals than Venice and more bridges than Paris. I was excited to explore it, but disappointed not to have got here sooner. Alex waited in line for about half an hour for freshly made pasta while I ordered a pizza. The food was nice, but the service was thoroughly disorganised and, like in Germany, you could not get tap water. Such a strange idea, especially considering Sabrina was very sick, coughing repeatedly and me not feeling much better.

The poor service and long waiting times put Alex in a bad mood, but Sabrina and I did our best to cheer him up. When we left the restaurant, the lights of the city had come on and the clouds had descended to form a very light mist all around us that we could just feel on our faces.

My first impression of the city was the amount of bikes! I read somewhere that there are more bikes than people, which makes no sense at all, but looking out at any footpath or open area, it is believable. My second impression is of the chaos these bikes and scooters create on the footpaths. I was nearly hit more than once, each time just standing still to encourage the bikes to go around me. I can only imagine what the confusion is like in summer. 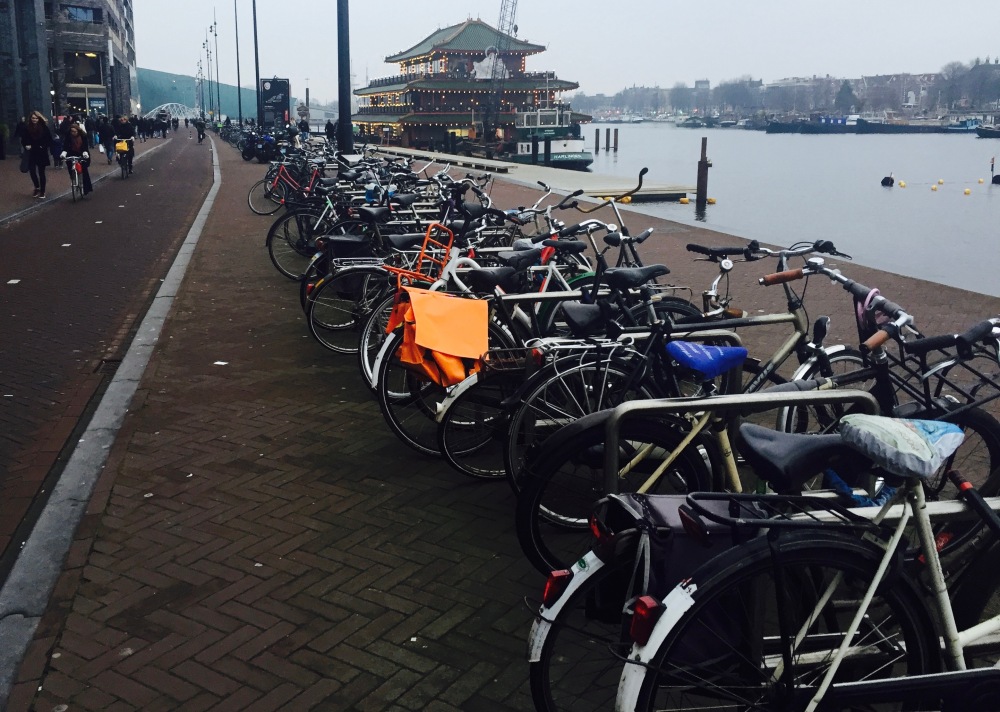 Surprisingly, our first stop in Amsterdam was at a church, where a service had just begun. We slid in through the doors quietly, removed our hats and stood at the back just as the choir finished their first song. We stayed for a short reading, then another song, just to hear the small choir’s voices rise up to the tip of the building’s dome. We all admired the architecture and artwork as we listened.

Back outside, Alex went into full tour guide mode and directed us around the city. Unfortunately, Sabrina’s condition worsened as we wandered and my voice disappeared almost completely. Honestly, what a hopeless pair. We were in the red light district very quickly and I realised how literal the name was, with red lights glowing above glass doors that had sex workers behind them. Before seeing the girls, Alex showed us the touristy spots of a brass piece of artwork embedded in the ground amongst the cobblestones and the essentials of any red light district: the hangover recovery centre and a sex shop, conveniently located right next door to a doughnut place.

I was a bit taken aback by the first pair we saw, the ladies being quite big and not very attractive, but they were not all the same. As we navigated through narrow alleyways (some barely more than shoulder width), the number of girls increased and along with them, the amount of make up and firmness of breasts. I felt awkward looking in at them, like I was invading their privacy, but others didn’t feel the same. Most of the girls were standing in their doorways, moving around a little, others were sitting on their phones, only a few were actively trying to get the attention of passers by. The whole time we were in the district, we saw three guys knock at the doors and negotiate price and services then following the girls into their rooms, after which they would shut the curtains. While all this was happening, the guy’s group of mates would wait outside. 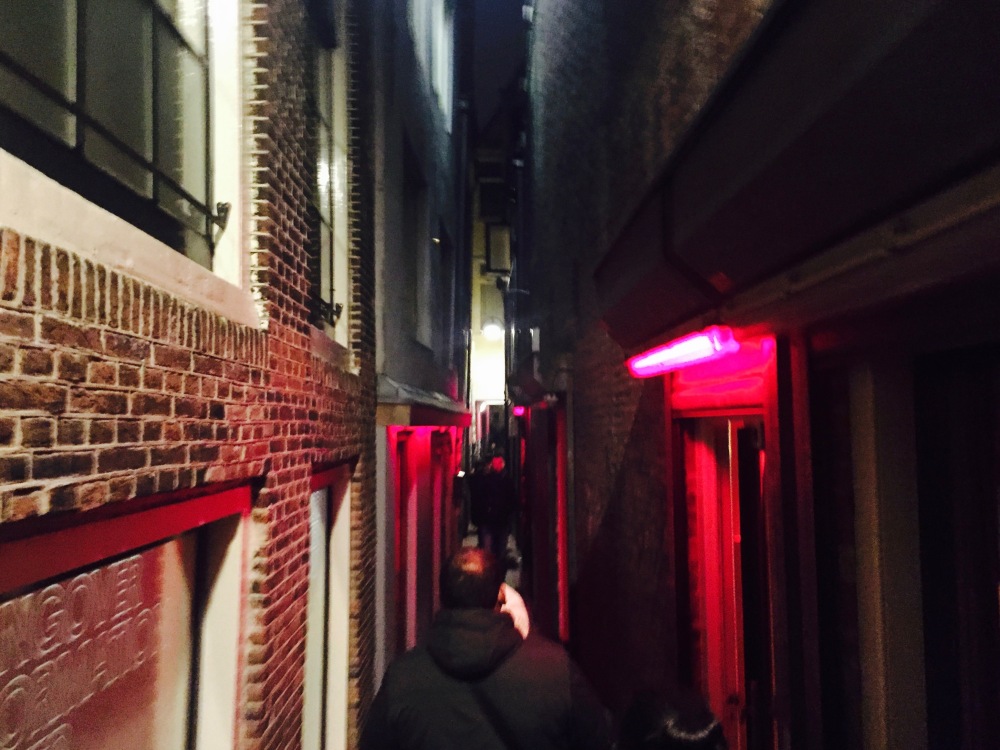 After seeing the bronze artwork of a woman’s bust and breast covered by a man’s hand embedded in the cobblestones, we left the streets with the red glow and wandered back towards the centre of the city where we would walk the canals to see all the elements of the light show which was on for Christmas. The first installation was light-shaped bicycles jumping in and out of the river. According to the sign for this exhibit, over 15,000 bicycles are pulled from the canals each year. Which is crazy!

As we continued walking along the canal, we were disappointed with most of the light installations. We had been expecting dynamic shows, but instead, some seemed to be “art” which we didn’t get the meaning of.

Alex pointed out the leaning buildings that surrounded us. When they were built way back when, to facilitate the lifting of goods up to the top floors from the ground via a pulley, the buildings were built on a lean. I wonder if I would have noticed had he not pointed it out to me. The result is a very adhoc look to the buildings that are wedged together which might look messy to some, but it gives the place a uniqueness. In these buildings, we saw families sitting down to dinner, an oxymoron to what was going on outside.

Sabrina was getting sicker and sicker as we walked, so we cut the light tour short, especially since we’d seen what was probably the best installation with the floating lanterns on the water that changed colour. We’d also stopped to see some of the local rowing clubs row their dragon boats down the river to the sound of a drum and lit up like Christmas trees. They were all having a great laugh. We did one more tour of the red light district then found our way back to central station, all the while amongst the chaos of cars on ridiculously narrow roads and bikes (in some cases with kids riding along in them) crossing every which way. The atmosphere is a brilliant character of the city, but what ruins it for me is the smoky air. Weed is legal in the Netherlands and you’re still allowed to smoke in public places and even inside some bars. The combination of weed and tobacco smoke makes me screw up my nose and I’m sure my clothes will smell of it for days. 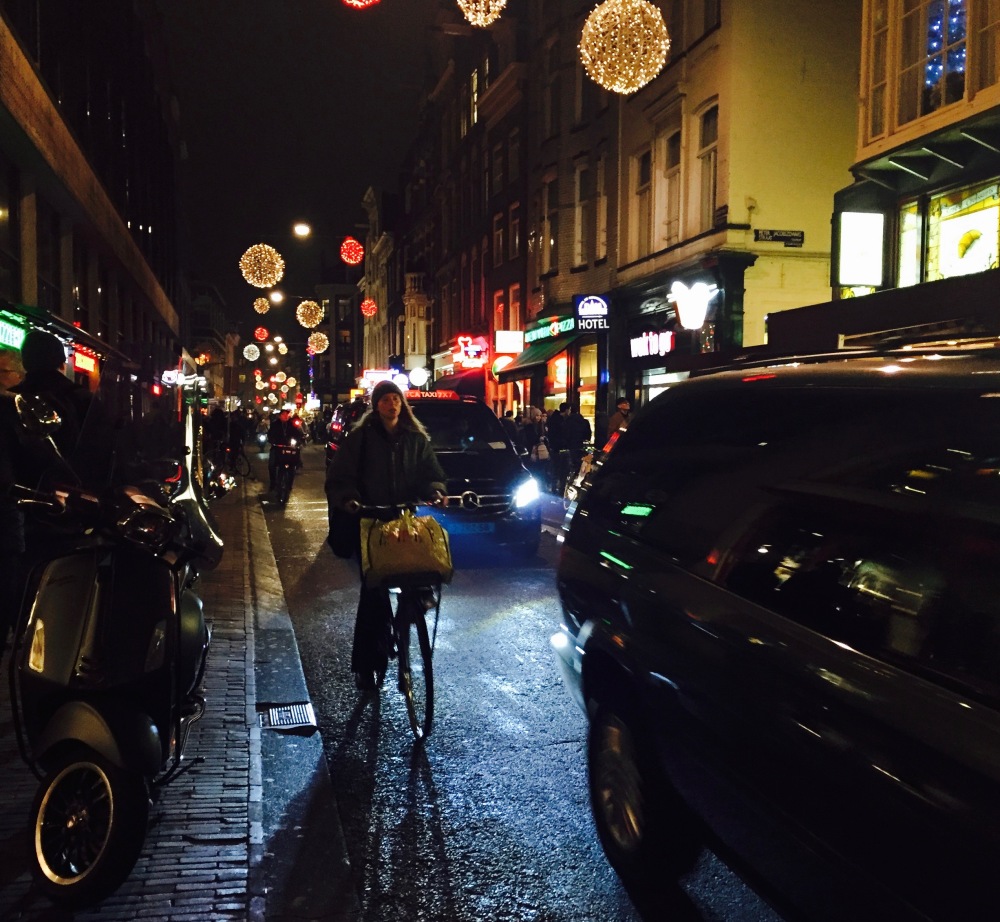 This time we paid for our bus tickets to get back to the car, but it was only EUR8 for three of us. By the time we got back to the car it was after 9pm, so we really hadn’t spent all that long in the city of sin since we’d had such a late start, but we were all tired, Sabrina especially. She slept all the way home, except for a quick bathroom break.

My hosts were straight into bed as soon as we got home. I stayed up an hour or so hatching plans to stay in Paris for the week since Alex would be keeping Tesla hours and there really wasn’t all the much to keep me entertained in Tilburg.

Netherlands Fact #1: The buildings in Amsterdam are so narrow because properties were taxed based on the width of the building, therefore, narrower is cheaper!